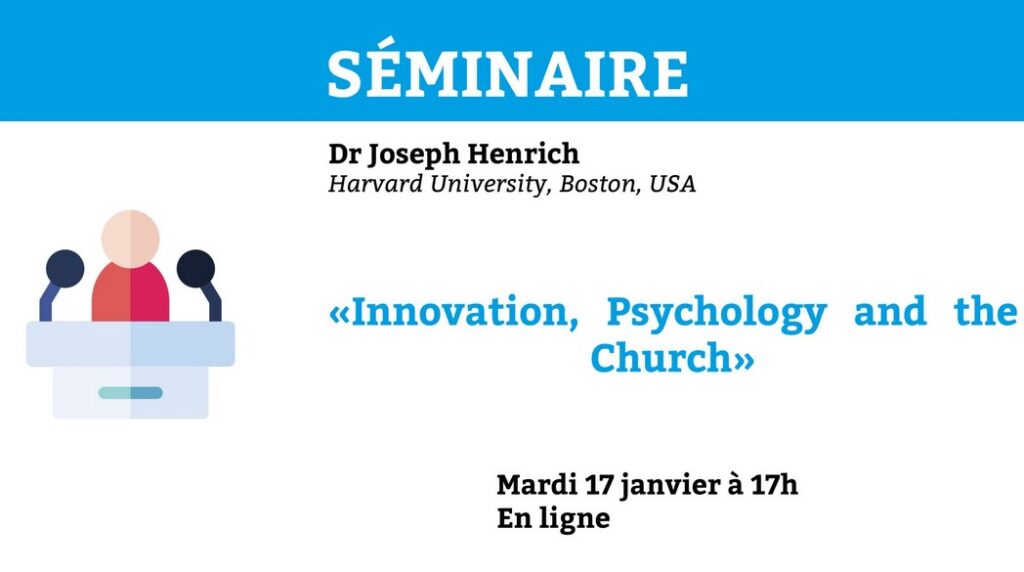 “Innovation, Psychology and the Church”

The Henrich research program aims to construct a vertically integrated approach to culture and cultural evolution that synthesizes theory and methods from across the sciences, particularly from psychology, economics, biology, and anthropology. The projects conducted in the laboratory are conducted within the theoretical framework that links the various avenues. This approach grounds the study of culture and cultural evolution within evolutionary theory thereby unifying the study of human behavior with the rest of the natural world without ignoring the importance of cultural
learning or cultural history in understanding humans.
In this presentation, Joe Henrich will highlight certain key aspects of our research program and review past work in setting out current directions. He will in particular talk about the different psychologies and cognitive processes and how this shaped us humans, and about the link to biology.
He will talk in extenso about what makes WEIRD (Western Educated Industrialized Democratic) countries so unique, and how social institutions, norms and prescriptions shaped our brains and behavior.
https://henrich.fas.harvard.edu/
https://weirdpeople.fas.harvard.edu/

About Joe Henrich : Dr. Henrich (UCLA, Anthropology, 1999) is a professor and chair at Harvard University in the Department of Human Evolutionary Biology. Broadly, his research focuses on cultural evolution, and culture-driven genetic evolution. He’s conducted anthropological fieldwork in Peru, Chile and in the South Pacific, as well as having spearheaded several large comparative projects on human sociality. In 2004 he won the Presidential Early Career Award for young scientists, and, in 2009, the Early Career Award for Distinguished Contributions bestowed by the Human Behavior and
Evolution Society. He’s been granted academic tenure in four disciplines: anthropology, psychology, economics and human evolutionary biology. Dr. Henrich is also a senior fellow in the Canadian Institute for Advanced Research. His other books and edited volumes include Why Humans Cooperate (Henrich and Henrich 2007), Foundations of Human Sociality: Economic Experiments and Ethnographic Evidence from 15 Small-Scale Societies (Henrich, Boyd, Bowles, Camerer Fehr and
Gintis, 2004) and Experimenting with Social Norms (Ensminger and Henrich, 2014). See also his more recent books: https://www.amazon.com/stores/JosephHenrich/author/B01FT8BOWU?ref=ap_rdr&store_ref=ap_rdr&isDramIntegrate d=true&shoppingPortalEnabled=true

Replay at this link